Universal Petroleum or just UP, is a large Texas-based petrochemical corporation.

Before the beginning of the game, UP had already been extracting Venezuela's oil supply when your character is introduced in Mercenaries 2: World in Flames. They are well-established in-country and do not take well to any efforts to cut in on or put an end to their oil profits. When Solano comes to power, Universal Petroleum is forced to defend their oil fields and assets from both Solano's "nationalization" and the Guerillas' campaign to cast them out of the country. Both faction's goals threaten to be extremely costly for Universal Petroleum if they get anywhere, and UP executives would rather spend lavish amounts of money defending their assets in Venezuela and returning the situation to the previous status quo than see either Ramon Solano or the Guerillas' campaigns succeed. Furthermore, the chaos caused by Solano's seizure of power and the fighting for control of the country between multiple groups has created a perfect environment for piracy; Universal Petroleum is a very obviously wealthy company, and a natural target for organized criminals seeking a profit. For these reasons, UP has hired the services of mercenaries from Tactical Solutions Inc.

UP is headed by Dr. Lorraine Rubin, who has one goal in Venezuela: "Keep the oil flowing". Universal Petroleum controls most of the tankers and oil rigs on Lake Maracaibo, and Tactical Solutions soldiers patrol the areas around them with extreme vigilance. They are also seen patrolling the UP refinery but seem to be fighting a tug-of-war with the VZ forces nearby. Their boats can be seen around the northern area of the map, on the sea that separates the mainland with the islands controlled by the Balseros Crew, it's common to see UP and Pirates fighting there.

UP's HQ is easily one of the tallest buildings in Venezuela. This jet-black monolith can be seen as far away as the Pirate HQ. Prior to the invasion of Venezuela by the AN and the Chinese, Dr. Lorraine Rubin can be found here to offer 2 contracts. The HQ is surrounded by guard towers with troops, several Raven SUV assault units, and rocket infantry. If the player sides with the Chinese, one of their missions involve destroying UP's headquarters. Doing this will immediately destroy the player's positive relationship with UP (can be bribed or kill PLAV troops until they are friendly). To deter such an attack, AN troops, tanks, APCs, AN rocket troops, and helicopters patrol Maracaibo alongside the full bulk of Tactical Solutions Incorporated's arsenal.

According to Fiona, Universal Petroleum tricked the pre-Solano government into giving them exclusive access to their oil, and returning a "ridiculously small cut" as reimbursement.

During a mission where the player must help protect David Espinoza as he burns some documents, it's revealed that they were evidence that proved UP's scam against the Venezuelans. David states that they were able to make the Venezuelans pay the UP for their own oil which the UP was drilling for. Small oil rigs can be found all over Venezuela. There can also be some solitary drilling platforms can be found around the outskirts of the UP refinery.

Tactical Solutions Incorporated is a Texas-based mercenary company hired by UP to protect their operations and assets in Venezuela. Which can seem fairly obvious from the southern drawl in their voices, yet since they're NPCs they don't have a great deal of lines.

Another, usually soldiers with balaclava are snipers. 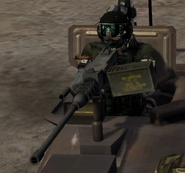 Universal Petroleum executive.
Add a photo to this gallery
Retrieved from "https://mercenaries.fandom.com/wiki/Universal_Petroleum?oldid=21976"
Community content is available under CC-BY-SA unless otherwise noted.