Mercenaries Wiki
Register
Don't have an account?
Sign In
in: Needs Expansion, Characters, Deck of 52,
and 3 more

The Spades are the fourth and last suit the mercenary hunts down in the Northern Province of North Korea during Mercenaries: Playground of Destruction.

They are comprised of Song's personal body guards, advisors and Song himself. They are very well trained and are heavily guarded, making them very difficult to capture or kill and verify. They are located in the Northern Province, along with the Hearts, but are only possible to verify once the Ace of Hearts contract is completed.

The Spades are the fourth and last suit in the game. They are comprised of Song's personal body guards, his advisors and himself. They all have excellent training and protection making them the hardest suit to verify. Cards 2-10 are exclusively female, extremely dangerous and quite capable of defending themselves. They are commonly armed with some of the most advanced weapons in the game and escorted by tanks, APCs, a small army of soldiers and at least one Mi-35 gunship. 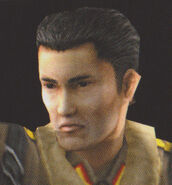 Choi Song, the Ace of Spades

Kai Yun, the King of Spades

Yong Park, The Queen of Spades

Kon Lee, the Jack of Spades

Yun-yeon Cho, the Ten of Spades

Soo-heon Park, the Nine of Spades

Shin-seok Kim, the Eight of Spades

Moon-Han Cheon, the Seven of Spades

Min-seon Yun, the Six of Spades

Keon Park, the Five of Spades

Joo-eun An, the Four of Spades

Jin-weon Seo, the Three of Spades

Dae Kim, the Two of Spades