Oil Rigs are large, oil drilling and extraction platforms set up on the water that are used by the Venezuelan government, Allied Nations and Universal Petroleum in Mercenaries 2: World in Flames.

There are a total of 3 large oil rigs found in Venezuela.

There are also many smaller and numerous oil mining derricks set up in lakes and on land that are used by Universal Petroleum. The derricks found in the water are usually guarded by mines and UP Warhorse Patrol Boats.

﻿*In the PS2 version, there is only one oil rig while there are three in the Xbox 360/PS3 version. 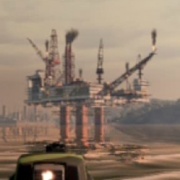 One of the mercs destroying an oil rig.
Add a photo to this gallery
Retrieved from "https://mercenaries.fandom.com/wiki/Oil_Rig?oldid=19037"
Community content is available under CC-BY-SA unless otherwise noted.