Monuments are iconic statues built in honor of General Choi Song that can be found throughout North Korea in Mercenaries: Playground of Destruction.

During Song's short-lived dictatorship of North Korea, he commanded several monuments to be built in his honor, most of them resemble large statues bearing his image, although they also take the form of obelisks, warrior sculptures and statues representing the laborers of a socialist nation.

During the Allied invasion of North Korea, many of these statues were discovered by the SKU as they moved into the warzone, according to Buford, the South Koreans find these monuments to be very "demoralizing" and requests the mercenary to "arrange them to go away somehow," doing so will increase South Korean favor towards the player, as well as being given a cash bonus for every monument that is toppled.

There are a total of 21 monuments (although only 20 are required for a big bonus, so why there is a 21st is unknown, but it is most likely an oversight because two statues can be found side-by-side in one area).

They are scattered around between the Southern and Northern Province. They are easier to find compared to the other bounties due to their larger size and are almost always located in the heart of a city or somewhere nearby. The only problem with them is that they are quite resilient and may take a pounding before going down.

Similar to listening posts, blueprints and national treasures, monuments are best utilised for their ability to quickly gain standing with a certain faction (in this case South Korea). If the player intends to do contracts with all the factions, doing Chinese contracts may make South Korea hostile towards the player. Should the player have a monument reserved, becoming friendly enough to undertake South Korean contracts should take significantly less time and money than bribing or doing other tasks to increase standing. Considering the fact that monuments are scarce and the fact that their monetary gain isn't significant compared to other income, they're best utilised to boost faction standing.

The actual statues of Song can most easily be destroyed with a single C4 charge, but if the player does not have any it may take about three RPG rockets to destroy it, or a couple of well placed tank shells or missiles. The smaller obelisk type monuments are much weaker than the large Song statues and can be destroyed with less explosives, but small arms fire will not destroy them.

Below is a list of all monuments and where to find them: 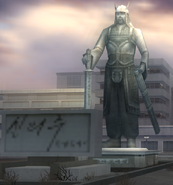 The monument located at the entrance of Sinuiju

One of the Worker's Movement monuments
Add a photo to this gallery
Retrieved from "https://mercenaries.fandom.com/wiki/Monuments?oldid=23538"
Community content is available under CC-BY-SA unless otherwise noted.