Unknown (Somewhere in his 50's)

"The South Korean Union's leader is actually an American. Buford is a burnt out CIA agent who has been working in the field for way too long. He's determined to 'get it right' this time and establish a strong pro-American democracy in a unified Korea. He sees Korea as the gateway to bringing democracy to China, and he still harbors an old-fashioned hatred of Communism and Red China. He thinks of a merc as 'one of the good guys' and is happy to share what Western comforts he has."
— Mercenaries: Playground of Destruction game manual

Mitchell Buford is an American Central Intelligence Agency agent featured in Mercenaries: Playground of Destruction. He is the main contact for the mercenary within the South Korean army. Although he is not technically a member of the South Korean army, he is the CIA agent who is working with them to help them take care of General Song due to their lighter armor and lesser numbered soldiers. This "alliance" is known as the SKU (South Korean Union), which is made up of the CIA backed ROKA (Republic Of Korea Army) in hopes that Buford can provide a happy and peaceful friendship between the East and West.

"Lotta' people want a slice of the DPRK's pie. Well they just gotta get in line."
— Agent Mitchell Buford

Buford is on the verge of becoming a veteran CIA agent and has been working on the field for a very long time, specifically 30 years in South Korea, and apparently hasn't had very much luck in his career. He sees the Song Initiative as a chance to "get it right" and reunify Korea in hopes of it becoming pro-Democracy and a strong ally of America to increase its area of influence. Buford can best be described as a "Cold War relic," as his distaste towards Communism attests, and because of this he also hates the current government of China and hopes that by defeating them in Korea it will change them and hopefully convert them to Democracy.

He is a very western-style man and prefers the company of the mercenary very nicely. When Buford first meets the mercenary he is happy to see them and trusts them, leaving them to the defense of the HQ. After the HQ is successfully defended he is over-joyed by the merc's work and automatically knows they will be a good asset. Although it may seem that Buford does not really like the South Korean army, he actually does care greatly for his troops and would rather not risk their lives in battle, leading to very few missions involving full frontal assaults with many field troops and rather trying to gain more information before battles. If the merc ever kills any of his men, Buford will threaten the merc next time he sees them by saying that if the merc continues to kill them he will "personally" shoot them dead.

Buford does not seem to get along well with any of the other factions in the game and even less so with their leaders, notably with Colonel Garrett. During a radio conversation with Garrett, Buford calls him "Mr. Garrett" to which Garrett sees as disrespectful to his rank. Buford is then heard sarcastically replying "I'm sorry, Colonel Garrett." In another conversation with the mercenary, Buford calls Garrett an "overgrown boy scout."

Buford shares a particularly adversarial relationship with Colonel Peng due to the latter's conflicting goal in North Korea to install a communist government in South Korea. However, he remarks that Beijing sent the right man to do the job, perhaps showing he has some respect for him as an enemy; an opinion that Peng shares about Buford. 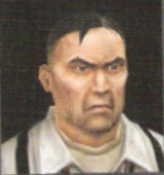 Buford as he appears in the instruction manual 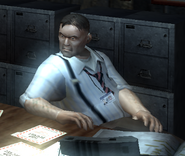 Add a photo to this gallery
Retrieved from "https://mercenaries.fandom.com/wiki/Mitchell_Buford?oldid=22407"
Community content is available under CC-BY-SA unless otherwise noted.