Fiona Taylor is a recurring support character in the Mercenaries series. She is commonly portrayed as a technical support for the player.

Fiona was previously a member of the Royal Australian Navy as a lieutenant, specializing in submarine electronics warfare, and then as an operative for the ASIS (Australian Secret Intelligence Service) but then gave it up fairly early to join ExOps, due to preferring to actually use computers, instead of just fixing them.

In Mercenaries: Playground of Destruction, Fiona provides technical support for the player during his/her stay in North Korea. She is never physically seen in the game, operating outside the theatre of battle, she does however, have a portrait in the instruction manual for the game, which shows her as having blonde hair.

During the events of Mercenaries 2: World in Flames, Fiona continues to act as the technical support for the three mercenaries after their departure from ExOps.

She appears to have developed a more aggressive personality, pulling a gun out at Ewan and Eva when they first join the PMC. She also appears to have dyed her hair, as it is now red as opposed to blonde from the first game.

During the UP contract "Phone Tag," it is revealed that after an operation with the mercenaries in Montenegro, something went wrong with the people they were working with and from that point on they agreed to work alone, however they realised that needed more operatives and opted to create the Private Military Company.

Also the pink Racing Inferno that appears outside the entrance of the villa is owned by Fiona. When the mercenary gets into it she will become angry and say things such as "Don't take my car, DON'T TAKE MY...oh, never mind...". If the vehicle gets destroyed either by enemy gunfire or just careless driving, you will have to pay $10,000 in reparations to Fiona.

After the player beats Fiona's Challenges on Level 2 inside the Villa, they will receive a supply drop called "Fiona's Favourites." This supply crate contains the PDW machine pistol. It also contains ammo, grenades, several C4 charges and a med kit. 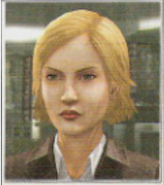 Fiona as she appeared in the instruction manual.
Add a photo to this gallery

Fiona meeting Ewan for the first time
Add a photo to this gallery
Retrieved from "https://mercenaries.fandom.com/wiki/Fiona_Taylor?oldid=23031"
Community content is available under CC-BY-SA unless otherwise noted.