C-4 is an explosive that can be remotely detonated that is featured in Mercenaries: Playground of Destruction and Mercenaries 2: World in Flames.

The C-4 Explosive Charge is one of the strongest explosives in the modern world. A small rectangular block, the C-4 has a few antennae protruding from the top of the explosive. An LED light on top of the charge blinks periodically when the charge is set.

Activated with a remote detonator with a maximum range of 50 yards, up to eight can be placed at a time. They are extremely powerful, and can easily destroy heavy armor and other vehicles, as well as two alone is enough to destroy almost any building. To move them if they are on the ground, the player can melee them which will make the mercenary kick the C-4.

C-4 explosives are the most important component of this quite deadly tactic. The player simply jumps on top of a vehicle (the baggage car works best), and plants multiple charges on top (for the baggage car, the area behind the cabin works best) Once that is done, the player makes sure to equip the detonator, then drives to the target.

If the baggage car is chosen for the bomb, there is an added bonus of being disguised as a civilian. When the player reaches the target, they can either drive to it at high speed, ditch, and detonate when impact is made, or, for style, park next to the target, get out, run, and then detonate. This is handy for blowing up buildings and other vehicles, and if charges are large in number, a small defensive position.

While the player is driving, it will often seem like the C-4 is about to fall off, but on the baggage car, it won't unless placed on top of the cabin. For other vehicles, the player has to experiment which locations work best. More often than not, charges should be placed on the hood of vehicles if they have them, they will not fall off from that location. 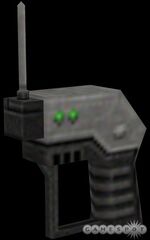 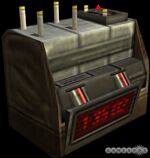 C4 Charge (Mercs 1)
Add a photo to this gallery
Retrieved from "https://mercenaries.fandom.com/wiki/C-4?oldid=18754"
Community content is available under CC-BY-SA unless otherwise noted.