The Anti-Materiel Rifles are a pair identical weapons with the same name and similar skins sold by the Allied Nations and People's Liberation Army in Mercenaries 2: World in Flames.

These rifles are supposed to be capable of striking targets from miles away and penetrating through thick material like concrete. The range, building damage and engine block destruction are not represented in Mercenaries 2.

Nevertheless, it is a major upgrade over the ordinary sniper rifle, it can kill any infantry unit with a single shot anywhere on the body and can cause minor damage to emplaced weapons and light vehicles (armor types 1 and 2).

While damage against emplacements and vehicles is inefficient compared to explosives, (ie: each shot inflicts only 12% damage to a stationary recoilless rifle), Anti-Materiel Rifles have the unique ability to accurately 'one shot' kill any human target through emplaced weapons, light vehicles, including light helicopters.

If the player likes sniping, wants to stay stealthy from a distance or just wants serious and accurate overkill, this is the rifle to use. It is quite ammuntion-efficient against infantry, so it's a perfectly-viable primary weapon.

There are no known Anti-Material Supply Drop locations on the map. Instead, these supply drops must be first unlocked in the AN or Chinese shop by either completing outpost capture missions (AN) or destroying a building target (China). Upon unlocking, these supply drops will be available for $22.5k ($15k when faction relations are friendly).

The 12.7 mm variant of the Anti Materiel Rifle appears to have been heavily influenced by the Russian KVSK 12.7mm  sniper rifle. It utilizes the same bullpup configuration and overall build.

The .50 cal variant bears a heavy resemblance to the M95, utilizing the same bullpup configuration and overall build. 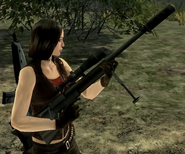 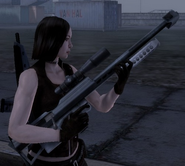 .50cal
Add a photo to this gallery
Retrieved from "https://mercenaries.fandom.com/wiki/Anti-Materiel_Rifle?oldid=22331"
Community content is available under CC-BY-SA unless otherwise noted.